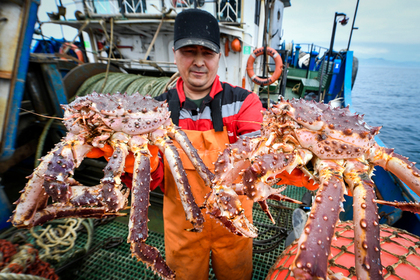 King crabs have become a rock star in the Chinese seafood market, and recent years have shown a dramatic increase in the country’s import, according to media reports. Available data show that its imports have skyrocketed from 1,500 tons in 2015 to around 10,000 tons in 2018. And this year the number is expected to reach 13,000 tons.

Among all exporters, Russia, China’s neighbor, has risen to prominence. For example, statistics show Shanghai’s import from Russia has ballooned by 950% this year compared with the same period last year to reach 850 tons. After Russia’s entry into Shanghai in June 2017, one ship of its king crabs, which weigh between 50 tons and 88 tons at most, are delivered on a monthly basis.

This has helped cut Shanghai’s import costs and retail prices. Primary king crab supplies used to be imported from Norway and Sweden. Data read that these crabs’ retail price has plummeted from 240 yuan/jin (1 jin=0.5 kg; $33.92/jin USD) last September to 180 yuan/jin ($25.44/jin USD) in early September this year and dropped even further, to about 130 yuan/jin ($18.37/jin USD) in October thanks to great supply and the elimination of middlemen.

With more on the way, Shanghai is challenged by the problem of insufficient storage space and that of transporting sea water from 30 kilometers away to its warehouse. To tackle the problems, one Shanghai company drafted a 55-million-yuan (~$7.8 million USD) investment plan to build a distribution center in Shandong, and this center is under construction now. When it is finished, China will be able to import even more king crabs, bringing to this huge market even greater changes.