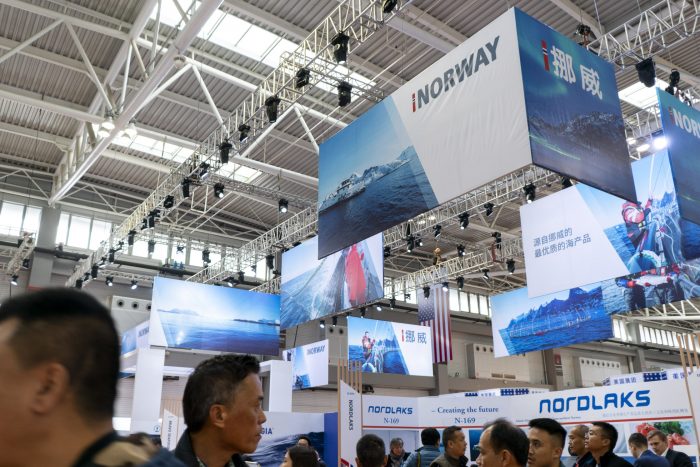 QINGDAO, China — The first stage in developing China’s salmon market is now complete with Atlantic salmon now ubiquitous in big cities as an ingredient in Japanese sashimi restaurants. Stage two is all about getting Chinese to eat salmon in their national cuisine, a market expert said.

“It’s easy to get salmon anywhere, so that stage has passed,” said Xu Peng Qi, who claims to be the first importer of Norwegian salmon into China, speaking at a conference held before the recent China Fisheries & Seafood Expo in Qingdao. “We have reached the consensus that salmon consumption will transfer from restaurant and sushi to households, and it will enter Chinese restaurants.”

For now, fresh Atlantic salmon fillets served sashimi style account for the bulk of the 100,000 metric tons of China’s imports, versus only about 20,000t in frozen imports. For China’s market to grow exponentially, most of that new growth will occur in the frozen segment and that means in Chinese cuisine, Xu said.

China’s Atlantic salmon import industry in its current guise maybe showing the first signs of a slowdown. Major e-commerce retailers such as JD.com and Alibaba Group have muscled smaller distributors out of the market as they struggled with high packaging costs and the lack of dedicated cold chain storage.

The Norwegian Seafood Council (NSC) tempered its growth forecasts for China, predicting it could become the second-largest salmon market by 2025 or demand of about 150,000t to 200,000t. The NSC indicated the Chinese market could be 240,000t (whole fish equivalent) by that timeframe in previous presentations. The US is the world’s biggest importer, consuming 400,000t a year.

Chinese consumers on average only consume 100g of salmon a year, versus 1.3kg per capita in the US and 3.1kg per capita in France. A tripling of Chinese consumption to 300g per head takes imports to more than 200,000t a year, said Trond Valderhaug, who heads Asian sales for Mowi, the world’s largest salmon farmer.

Overall seafood e-commerce slowed to growth of 22.9% to 398 million orders or CNY 16.9 billion, versus an increase of over 30% the year before. About a third of that was fresh seafood delivery, and most of the biggest growth gains are now coming from smaller or Tier 3 or Tier 4 category cities, with the larger cities showing signs of maturity. Going mainstream means showing Chinese consumers how to cook the fish and incorporate it in Chinese cuisine, a Chilean exporter told Undercurrent News.

Norway is currently negotiating a free trade agreement with China and the eventual passing of that agreement will drive competition with China to gain access to major contracts. Norway currently pays a 10% import tax. China approved more Norwegian regions with licenses to export and volume flow will triple by year’s end as Chinese authorities lift restrictions that were imposed amid concerns of infectious salmon anemia (ISA), the NSC said.

Those extra volumes may spur some creative marketing to enter the Chinese cuisine of home-cooking space. For that to happen, companies and exporters in general need to initiate a marketing campaign to extoll the benefits of salmon in Chinese cooking, and to devise recipes, said one major Chilean exporter consulted by Undercurrent. This would not be the Norway carves itself out a space. The NSC was instrumental in getting Japanese chefs to start Atlantic salmon as a sushi ingredient decades ago.

Some companies at this year’s China show already started to go for non sashimi segments. Leroy Seafood Group under its Norway Sea Foods brand launched a range of microwaveable products in global flavors in both skin-pack cod and salmon products for Chinese consumers. Dutch smokehouse Foppen  Groep is selling more smoked salmon, a product category that is only consumed in very niche parts of the Chinese market.

Several companies plan to sell sea trout into China from Iceland’s Matorka, and Norway’s Hofseth. Chinese consumers appreciate the sea trout or steelhead and see its red color as a sign of freshness, sales manager Eason Li told Undercurrent. Hofseth is also seeking to tap similar market demand in both Malaysia and Singapore.

The big outlier in assessing the future opportunity in supplying the Chinese market is the expected development of China’s coldwater aquaculture industry. Starting from a very small base, there are a growing number of trout suppliers from inland lake areas and recirculating aquaculture systems (RAS) that could tap the market.

The quality of Chinese trout is close to international standards, unlike other species in the country, and could enter the market in a fresher state than foreign imports, said Zhen Weizhong, a sales representative for Danish feed company BioMar Group.

Local producers have struggled to fight off misled concerns that trout contains is parasites and is not safe to eat raw, said Tang Juan, chief sales officer of Laoshang Corporation, China’s biggest trout producer. Tang said domestic producers have a great opportunity to tun the Chinese market around, especially as local companies understand the tastes of Chinese consumers.

“We need to work together to have better branding,” Tang said. “We want to make the consumer know that the quality for Chinese salmon [rainbow trout] is really high.”