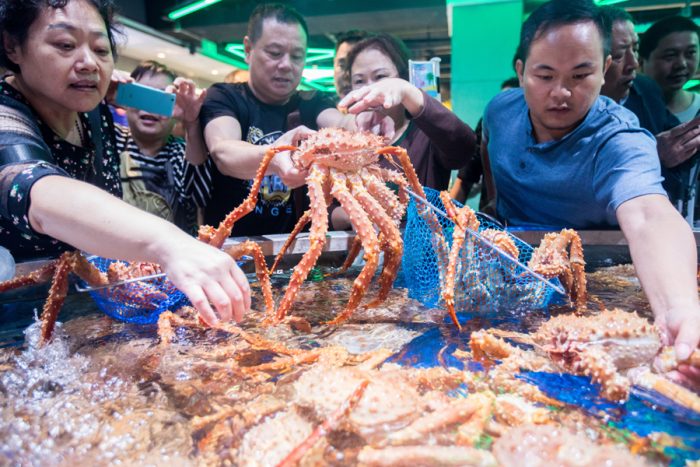 Speaking to Undercurrent News at the recent China Fisheries and Seafood Expo in Qingdao, the first vice president of Russian crab company Antey Group appears to be only half-joking.

After signing off on a $500 million investment in 7,000 metric tons of quota for king crab, snow crab and other deepwater crab species, which Antey will hold for 15 years, as well as a commitment to invest $200m in seven new crab fishing vessels, there is a kernel of truth to the joke.

In October, Russian crab companies, including Antey, invested $2 billion in auctions for 50% of Russia’s national crab quota. The value of the investment rests in large part on expected demand from China.

“It is not just us, it is also the same for other Russian crab companies. If something goes wrong with the Chinese market, probably every crab company in Russia will go bankrupt,” he said. “Sometimes I ask myself what we’ve gotten ourselves in to.”

Founded in 2010 and based out of Vladivostok in the far east, and Murmansk in the country’s northwest, Antey fishes for red king crab, blue king crab, brown crab, snow crab (opilio, bairdi and angulatus), as well as red snow crab, largely in the Arctic Circle. It also fishes further south in the Sea of Japan. Besides crab, the firm has a quota for 21,000t of groundfish and pelagics, while it also harvests wild salmon.

Prior to October’s auctions, Antey’s annual crab quota was 6,200t, less than half what it receives now (14,000t). This was allocated through historic precedent.

The company made huge margins, as its main cost was fishing. “Before the auction, the margins were a lot higher,” said Mikhnov. “It could get to 60%, but even 90%. Now, factoring the costs of the auction, it’s closer to 20-25%,” he said.

Should China’s rise in prosperity stall, margins could be squeezed further.

According to Chinese figures, in 2018 China imported 12,800 metric tons of live or fresh crab from Russia, worth $288 million.

The year prior, China imported 6,300t worth $103m, representing growth of 103% in volume and 179% in value in 2018 alone. Factoring in the gray trade of Russian crab across the country’s border with China in the latter’s northeast, China’s imports were likely higher still.

Mikhnov, like other Russian firms, expects this growth will continue.

“Antey had the vision about ten years ago to see the potential of the Chinese market. Even when China didn’t consume live crab, Antey started trying to create the market there,” said Mikhnov.

“We helped Chinese customers, taught them how to maintain the crab, how to transport it, how to keep it alive. From the start everything was with our assistance,” he said.

According to Mikhnov, some 60% of its quota is for king crab, among the most valuable species. To get even greater value from the product, the firm aims to work with customers downstream, which could also help shield it from a downturn.

“Basically our strategy right now is to work with the biggest distributors in China and not just give away the crab, but work in partnership,” said Mikhnov. “In the future, we will also help install new holding tanks and maybe start working with the end client.” During the China show, Antey held an elaborate dinner at the Himalayas Hotel in Qingdao, to woo new Chinese buyers.

Meanwhile, Mikhnov said the firm is looking at opportunities to develop markets in Europe. “There are lots of Chinese people there as well, so why not? If they consume here, why wouldn’t they also want to eat crab on the road at some point.”

Antey is also committed to building seven new vessels at a cost of over $200 million, to add to its fleet of 23 vessels currently. The agreement to build the modern 55-meter-long vessels, which will catch and deliver up to 150t of crab, was contingent on Antey’s participation in crab auctions.

“If we can build all the vessels within five years we would consider this an achievement,” he said.

“Our job is to catch the crab and sell it, not build the ships,” he said, noting Russian shipbuilders will design the vessels but he expects the firm to be closely involved in the design process.

To download an excel spreadsheet of who owns what following the auction, and how much they spent, click here.