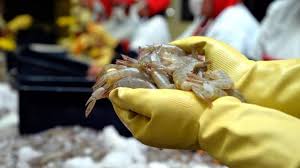 Ecuador’s shrimp exports to China soared 59% in April compared with March to a monthly record of 47,000 metric tons, but exports to the US and Europe slumped.

With four out of five shrimp shipped to China the surge took Ecuador’s overall exports for April to 58,000t, up 10% compared with March and up 4% compared with April of last year. The monthly value of exports to China came to $256 million, according to Ecuador’s aquaculture chamber, known by its Spanish abbreviation, CNA.

Continued strong Ecuadorian shrimp exports follows a sharp drop in monthly shipments to the US and Europe, down respectively 51% and 60% compared withMarch.